Last year, we did post-production sound on a short film, Fate Accompli, which was written and directed by our friend Eric Neal. Steve did some fantastic foley work, and I handled the dialog edit, effects and mix. Music was composed by Andrew Edwards. Reviews of the short are starting to show up, and here’s a good one that came out this week.

Here’s the film’s Facebook page. Also, check out the SHOrT in Chicago Film Fiesta where the film will be shown on Jan 24!

Ghost in the Graveyard soundtrack

We love those old horror movies from the late 1970s and early 1980s; the slasher films, the monster-from-outer-space films, the zombie films. What we especially love are the soundtracks. The really low-budget, simple scores that eschewed live orchestras in favor of banks of analog synthesizers and were often composed and performed by the director himself. And we love to use those soundtracks in our games. But invariably, we’ll cue up a track from one of these films to underscore a dramatic moment and realize that the players were thinking less about the game – and more about the movie the music came from.

So we decided to create our own awesome 80s horror movie music. As fate would have it, we do have a few vintage analog synths in our studio (including an old Moog Rogue and a Roland Juno 106), so we fired them up and started playing.

The result is the “Ghost in the Graveyard” soundtrack album: nine dark, moody music pieces performed on classic analog synths in the style of those fantastic 80s horror flicks.

There’s no movie, of course, just a bunch of cool music. But we kinda didn’t let that stop us. Just for kicks, as we were mastering the album, we also rounded up a couple of local actors and shot fake trailers and opening credits for the movie that doesn’t exist.

Ghost In The Graveyard Trailer #1 from Toxic Bag on Vimeo.

And we didn’t stop with the trailers! Downloads of the soundtrack from DrivethruRPG or Toxic Bag also include a special set of souvenir lobby cards, 2 movie posters and a reproduction of a 1983 newspaper ad with showtimes for “Ghost in the Graveyard.” 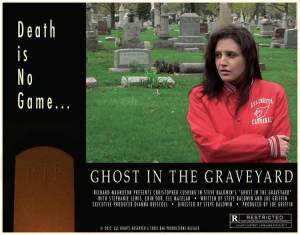 Clearly, we had a lot of fun working on this project. We hope you enjoy it as well.

You can see the trailers at our YouTube and Vimeo pages, and buy the soundtrack at Toxic Bag dot com or DrivethruRPG.

Special thanks to Stephanie Lewis, Alan Vuchichevich and Ele Matelan for their great work on the trailers!

Jiang Hu Productions’ film “The Sad Café,” for which we did the sound mix this past April, has been nominated for Best Drama Feature, Best Editing (Feature) and Best Score (Feature) at the Action On Film Festival. Congratulations and best of luck to director Bennie Woodell and everyone at Jiang Hu Productions!

We recently finished mixing Bennie Woodell’s film “The Sad Café.” The film had its world premiere at the Portage Theater in Chicago earlier this week. Congratulations to Bennie, the cast and crew, and everyone at Jiang Hu Productions!

More quick notes on what we’re up to.

• Joe has just finished tech week for Harvest at Oakton Community College. The sound design for this dystopian sci-fi play features extensive computer-glitch effects by Joe and music by Donny Who Loved Bowling. Harvest opens tonight and runs through May 1.

• Steve and Joe are currently mixing Bennie Woodell’s feature film “The Sad Café.” The film will screen at the Portage Theater in Chicago on May 22. For more info, visit the Sad Cafe Facebook page.

• Joe is doing final sound design and mixing for Getting To Know‘s newest release, Getting to Know the U.S. Presidents: Lincoln.

I just got done with tech week for the musical Putnam County Spelling Bee at Moraine Valley Community College. It runs this weekend and next.

As it’s a musical, the sound design (as far as effects are concerned) is not extensive, but due to the layout of the theater we had a few fun challenges with balancing front-of-house PA and monitor bleed, while making sure the cast could hear the band. So in a way it was just fine that the show had a low cue count; my attention was able to be focused on the PA issues.

(Of course, a musical can have a high demand for sound effects–my design for Evil Dead: The Musical had a couple hundred cues. So, y’know, excuse the above generalization please!)

We also brought in Figure 53’s QLab software for sound cue playback, to replace the SFX rig we used on the previous ten or so shows. I’ve been using QLab more and more for shows over the last couple of years, and I really enjoy it.

Next, I turn my attention to a show called Harvest at Oakton Community College, and a summer production of King Lear at Moraine Valley. Time to start my research!

Congratulations to the cast and crew of Putnam County Spelling Bee! Have a great run.

The video “Getting to Know the World’s Greatest Artists: Degas,” which I sound-designed and mixed, has won the American Library Association’s Notable Children’s Video award.

You can watch a clip of “Degas” here.

Congratulations to everyone at Getting To Know!

Our friends at Lost and Found Travel asked us to record the voiceover for their new travel show pilot. The episode chronicles their recent trip to Thailand, and you can watch it now on YouTube.

They’re headed to India now, so look for a second episode soon!

Just some quick notes on what’s happening in our world.

• One Sunday in October, we shot some footage for a series of web shorts we’re working on. Several of our friends from the Chicago theatre world came by to act for us. My brother Tim Griffin directed, and Mr. Blood is hard at work editing it all down. We hope to release it on our YouTube channel early in 2011.

• I’m going into tech this week for Kid Simple at Oakton Community College. This is my first live/foley show since 2003’s Deadworry, and it’s been fun and very challenging. My foley operator Phil Freeman is doing a great job with the enormous number of sound cues, and has constructed some fantastic sound rigs for the show. Kid Simple opens Dec. 2 and runs until Dec. 12.

• Right after I open Kid Simple I’m going straight into tech for Moraine Valley Community College’s One Man Christmas Carol, adapted and directed by Tommy Hensel. Tim Griffin and June Eubanks were in the studio last week to record the narration for the show, and I was fortunate enough to get the fantastic Rebecca Brooke M to come in and play fiddle for the Fezziwig party scene. One Man Christmas Carol will have one public performance on Sunday, December 12.

• And right after that –well, during all that, actually—I am diving into sound design and music work for Bohemian Theatre’s production of The Elephant Man, directed by June Eubanks. The Elephant Man opens opens January 7, 2011 at Theatre Wit, 1229 W. Belmont Avenue, Chicago, IL 60640.

• re: Alice, the adaption of Alice In Wonderland that my brother Tim Griffin wrote and world-premiered in 2004 is being produced again in downstate Illinois. I’m currently working with the director to provide him with my original sound design and music from the 2004 production for this new staging. It’s very exciting to see this show go up again.

We’ll have some Toxic Bag product updates and a few other announcements soon, but in the meantime, have a Happy Thanksgiving!

Another award for Getting to Know!

The American Library Association has named “Getting to Know the U.S. Presidents: Jefferson” as a Notable Children’s Video.

The video was produced by Kiki Stathakis, animated by George Berlin and edited by RJ Porzel. Joe Griffin of Toxic Bag Productions (that’s me!) did the sound design and mix. The video features Chicago actor Tim Griffin as the voice of President Thomas Jefferson. 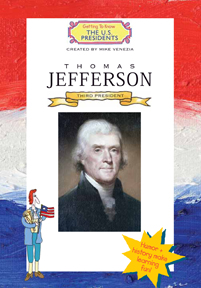 Congratulations to Getting to Know and everyone involved in the project!